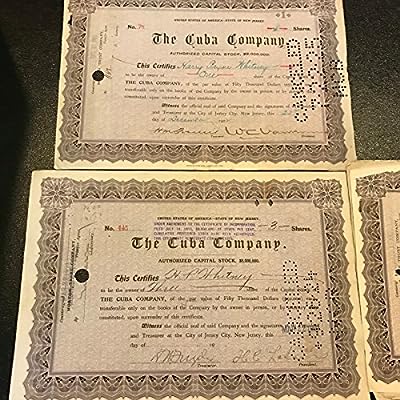 Price: $79.00
As of 2020-05-11 03:00:26 UTC (more info)
Product prices and availability are accurate as of 2020-05-11 03:00:26 UTC and are subject to change. Any price and availability information displayed on http://www.amazon.com/ at the time of purchase will apply to the purchase of this product.
Buy Now from Amazon
Product Information (more info)
CERTAIN CONTENT THAT APPEARS ON THIS SITE COMES FROM AMAZON SERVICES LLC. THIS CONTENT IS PROVIDED 'AS IS' AND IS SUBJECT TO CHANGE OR REMOVAL AT ANY TIME.

Lot Of (3) Original 1925 Harry Payne Whitney Signed Stock Certificates. There are a total of 4 signatures from Payne.
Harry Payne Whitney was a major figure in thoroughbred horse racing. He inherited a large stable from his father (including the great filly Artful and her sire Hamburg, and in 1915 established a horse breeding farm in Lexington, Kentucky where he developed the American polo pony by breeding American Quarter Horse stallions with his thoroughbred mares. He was thoroughbred racing's leading owner of the year in the United States on eight occasions and the breeder of almost two hundred stakes race winners. His leading sire was first Hamburg and then the great sire Broomstick, by Ben Brush. His Kentucky-bred horse Whisk Broom II (sired by Broomstick) raced in England, then at age six came back to the U.S. where he won the New York Handicap Triple. He also owned Upset, who gave Man o' War the only loss of his career.
Whitney had nineteen horses who ran in the Kentucky Derby, winning it the first time in 1915 with another Broomstick foal, Regret, the first filly ever to capture the race. Regret went on to earn Horse of the Year honors and was named to the National Museum of Racing and Hall of Fame. Whitney won the Kentucky Derby for the second time in 1927 with the colt Whiskery. His record of six wins in the Preakness Stakes stood as the most by any breeder until 1968 when Calumet Farm broke the record. Whitney's colt Burgomaster won the 1906 Belmont Stakes and also received Horse of the Year honors. Amongst many, Whitney's breeding operation produced Equipoise and Johren.
Whitney's stable won the following prestigious U.S.